FPA’s inaugural event took place in Seoul, Korea on December 2nd, 2017. More than 1200 leaders of various faiths and sectors of society have gathered to show support. The inaugural theme was, “Creating a New Spiritual Consciousness Rooted in God-centered Families.” Founder, Dr. Hyun Jin Preston Moon, shared a message on the importance and relevance of the mission of FPA and the hope that it brings to the world today.

More than 1,200 dignitaries, faith leaders, academics, and representatives of civil society and families from around the world convened at the inaugural ceremony of the Family Peace Association on December 2, 2017 at the Grand Hilton Hotel in Seoul, Korea.

The ceremony theme, “Creating a New Spiritual Consciousness Rooted in God-centered Families,” emphasized the importance of the family as the cornerstone of human civilization. The family was acknowledged as the most basic social unit that meets the physical, emotional and spiritual development of individuals, forming the building blocks for the development of humanity’s spiritual consciousness and peaceful and prosperous societies.

Representing their own faith traditions, including Buddhism, Christianity, and Islam, religious leaders shared the centrality of the family in building stable and peaceful societies.

Family Peace Association was co-founded by Dr. Hyun Jin Moon and his wife, Dr. Jun Sook Moon, to advance the mission of “building a world of peace through God-centered families.”

In his emotional delivery of the founding address, Dr. Moon expressed that the Family Peace Association is a part of his continued commitment to fulfill the work that his father, the late Rev. Sun Myung Moon, began. 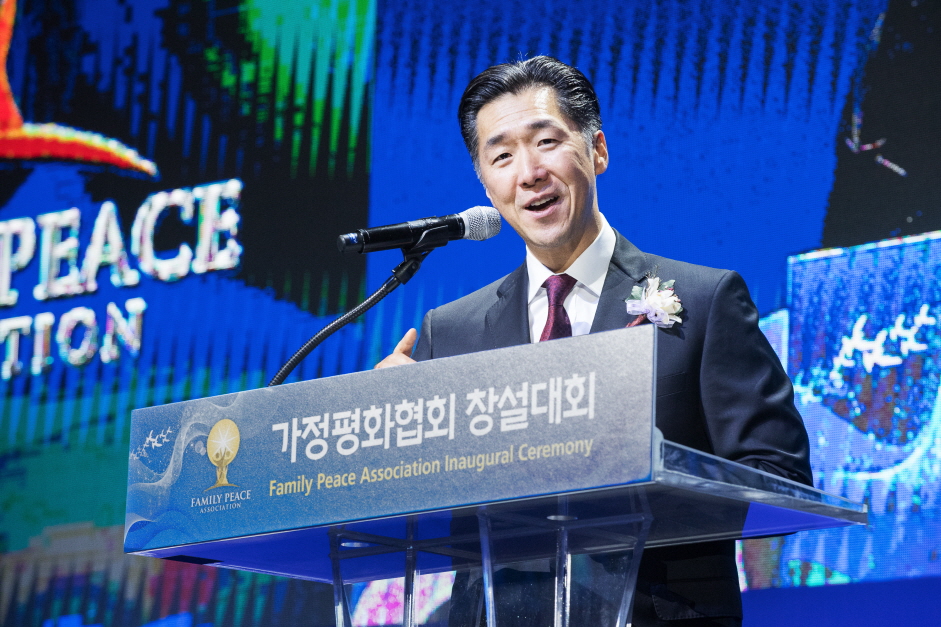 Dr. Hyun Jin Moon called for an united effort to strengthen God-centered families as the foundation for lasting peace.

“With the creation of the Family Peace Association, I am fulfilling that promise,” Dr. Moon said. “This spiritual movement will carry forward the original vision that animated my father’s life which is the dream of a peaceful ideal world where humanity stands as ‘One Family under God’.”

Dr. Moon encouraged families of all backgrounds to join together to counter negative trends that have undermined the family—increasing social problems, threatening basic human value and deepening identity-based divides.

“The role of God-centered families is central to all positive human development,” he emphasized, “since it brings back the divinity in that sacred institution and aligns it to the original purpose of creation. Without such families, humanity will not have the moral clarity and conviction to take on the challenges of this age and build a brighter future for our children and grandchildren.”

The Family Peace Association is a membership organization that fosters God-centered families to uplift the spiritual consciousness of humanity.